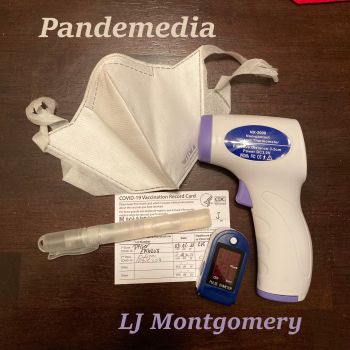 Pandemedia was largely completed in February 2021 while I was participating in February Album Writing Month. Some of the tracks evolved from chord progressions I worked out on guitar using a partial capo and recorded on my phone. Due to a lack of formal musical training, I found myself using oolimo.com to identify the chord names based on the combination of capo and finger positions. Then I was able to use the chord names with my digital tools to generate the accompaniment tracks you hear here. Some tracks ended up being quite different from the way they started out.

“Hit Me With the First Shot” was composed in response to my early morning searches for a COVID vaccine appointment. The group Maryland Vaccine Hunters was extremely helpful in proving guidance in this regard.

“Eyes of a Nurse” was inspired by this very moving article in the New York times called “Death, Through a Nurse’s Eyes.”

If you’d like to support me, you can purchase the album or individual tracks at https://montgomedia.bandcamp.com/album/pandemedia

Over the Rainbow is Real

A Hint of Spring

This musical effort was destined for my musical junk drawer until a friend commented that it suggested train travel and I revisited it.

Font
Off On
Size